Advanced Dungeons & Dragons 2nd Edition (1989) is often described as too complex, especially when it comes to the 'dreaded' THAC0 (To Hit Armor Class 0). This game mechanic is considered easy to demonstrate, yet difficult to describe. While this mathematical formula is a bit abstract, I will attempt to teach THAC0 in a way that anyone can understand (theoretically).

But first, we need a target number (the number you need to roll on a d20 to successfully hit a monster).

Armor Class is not an indication of a creatures literal 'suit of armor,' being rather an indication of how hard it would be for your character to successfully strike (hit) the creature. Note: Some Dungeon Masters won't tell you what the AC of a monster is, and will simply tell you if you hit or miss the creature (thus maintaining mystery).

Let's attack (and attempt to hit) a Gelatinous Cube.

Take a look at it's monster stats (click the image for a larger view, if needed): 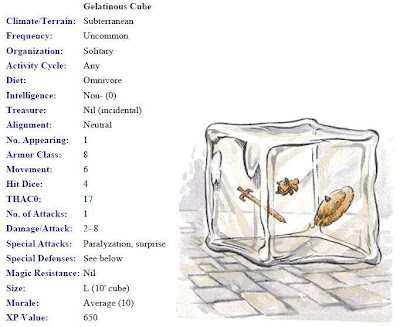 Yes, it's really that simple! But there is a little bit more to it than that.

For instance, if the creature you're attacking has a negative AC (for example, a -2 AC) you would then add this number to your THAC0 before calculating the target number. If your THAC0 is a 15, you would then have a new THAC0 of 17 when attacking a -2 creature.

The weapon you're using may have a modifier (most weapons have a modifier). Lets assume that the sword you're using is well crafted, and has a +3 modifier (this attack-roll-modifying-number helps you to hit targets). So subtract the swords +3 modifier from your THAC0 of 17; which is now a 14 (15 THAC0 vs. -2 AC = 17 THAC0 - +3 modifier = Target Number 14), so you need to roll a 14 or higher on a d20 to hit the beast. Note: there are also other types of modifiers that can come into play.

When you hit, you then roll for damage according to the weapon you're using (for example, if you attacked with a dagger, you would roll a d4 to determine how much damage you deal). Each weapon or spell that you can attack with will list the type of dice you use when rolling for damage.

Hope this helps to dispel the myth that THAC0 is extremely difficult to comprehend. In actual fact, 2nd Edition AD&D's THAC0 and 3rd/4th Edition D&D's 'd20 System,' are mathematically equivalent; the former using descending AC and the latter using ascending AC, but both reaching the same mathematical conclusion.
Posted by Retro RPG at 1:36 PM